Tag Archive for: BC Hydro 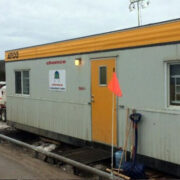 Kiewit has awarded Chemco and our JV partner Doig River First Nation the contract to install and operate the scale for the WAC Bennett Dam Rip- Rap Upgrade Project.

Since completion of dam construction nearly 50 years ago, there has been steady deterioration of the rip-rap—large boulder-sized rock that protects the upstream slope of the dam. Upgrading the deteriorated portions of the rip-rap will ensure long-term dam safety and erosion protection from ice and impact from wind and waves in the Williston Reservoir. In May 2016 BC Hydro received approval from the B.C. Utilities Commission for the project as its cost is above the $100 million threshold that triggered a regulatory review.